After getting multiple requests for lectures in English, dr. Rivas has decided to organize four English lectures about animals. They will be given on a Saturday afternoon, from 12.30 to 16.30 hours and will be held at the Free University in Amsterdam. 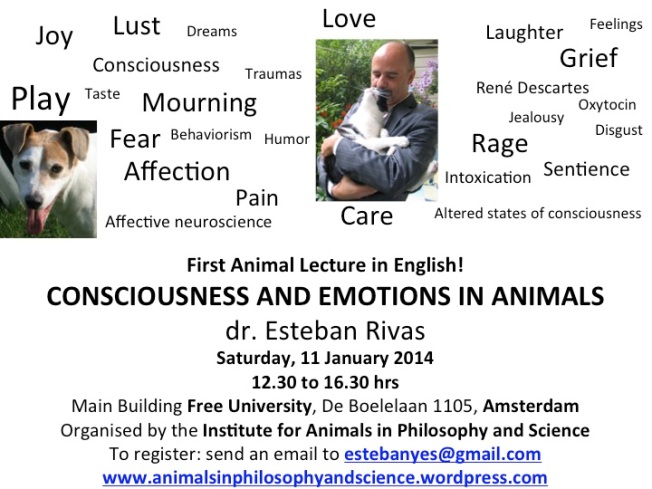 During this lecture dr. Rivas will address the question whether other animals have the ability to experience things like pain and pleasure. Are animals robots without subjective experiences or do animals experience sensations and other things in a phenomenally conscious way? The French philosopher René Descartes claimed that nonhuman animals could not be conscious. Behaviorism in psychology also led to a taboo on the subject of consciousness in general. Even today there are still scholars who do not ascribe consciousness to animals, often based on the absence of ‘higher’ cognitive abilities and language. In contrast are positions that argue for the presence of consciousness in animals by argueing from analogy, using systematic analyses of the nervous systems and behaviours of animals. Rivas will present the work of Jaak Panksepp on affective neuroscience, which shows that at least all mammals, and birds too, share a number of brain centers for the same emotional systems. I will also discuss the various emotions of animals. Which particular emotions do they have? Pleasure, pain, jealousy, guilt, gratitude? Which animals seem to mourn deceased conspecifics? And what similarities exist between humans and other animals with regard to altered states of consciousness, such as dreaming and being under the influence of psychoactive medication and drugs? 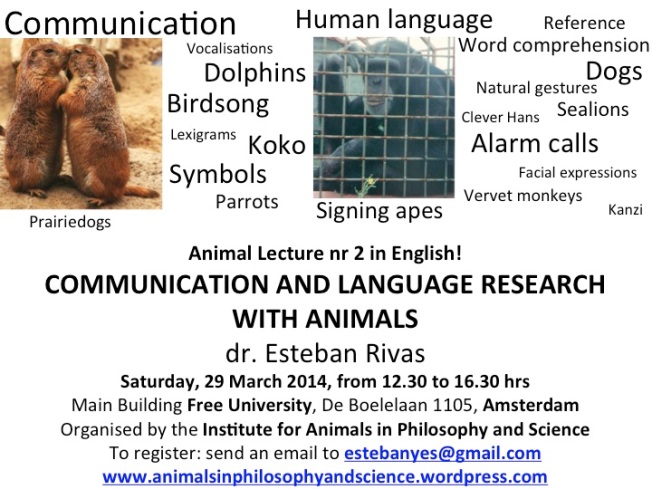 Animal communication takes places in many different ways. At a certain moment in evolution animal communication developed into human language. The question that scientists and philosophers have had for a long time, is whether humans are the only animals with language. In this lecture dr. Rivas will present recent developments in the scientific study of animal communication and he will discuss the results of language research with nonhuman animals. The following subjects will be presented: The characteristics of human language and animal communication. The relationship between language and brain and language development in human children. What referential information about predators is transmitted in the alarm calls of vervet monkeys and prairie dogs? What are the similarities between birdsong and human language? The natural communication of great apes: facial expressions, vocalisations and gestures. Language research with great apes has been taking place for more than a century. First there were attempts to teach them words, after which several projects were successful in teaching signs to great apes. The famous chimpanzee Washoe and the gorilla Koko learned to use more than hundred signs to communicate with humans. The bonobo Kanzi and other apes learned to communicate by means of geometric symbols or lexigrams. But there is also an ape language controversy, because in what way does this use of symbols compare to human language? Dr. Rivas will also present his own study of the language apes. Finally, the results of language research with dolphins, sealions, parrots (the famous parrot Alex), and dogs will be presented.

Animal Lecture 3: Recent research on the intelligence of dogs. 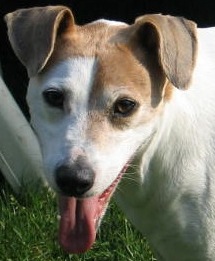 How smart are dogs?

In the past 19 years many new and exciting studies have been carried out on the intelligence or cognition of dogs. Special institutes for intelligence research with dogs have been set up at universities all over the world: the Family Dog Project at the University of Budapest (Adam Miklosi), the department of Comparative and Developmental Psychology at the Max Planck Institute for Evolutionary Anthroplogy at the University of Leipzig (Juliane Kaminski and Michael Tomasello), the Clever Dog Lab at the University of Vienna (Ludwig Huber), and the Duke Canine Cognition Center at Duke University in the USA (Brian Hare). During this lecture dr. Rivas will present and discuss the results of all these recent studies with dogs. Central themes are the social and physical intelligence of dogs. Subjects that will be presented are, amongst others: Do dogs understand what humans see, hear or know? What do dogs learn by social observation, is there evidence for imitation in dogs? Do dogs understand human communicative signals, such as pointing and gaze direction? How much evidence exists regarding empathy in dogs? What are the results of language research with dogs? Are dogs able to understand human words? What does dogs’ physical intelligence consists of, what do they know about their physical environment? Are dogs aware that objects keep existing (object permanence), can dogs count? How do they behave in exciting studies such as the magic cup? This lecture will give you a good review of the current state of affairs of our scientific knowledge about the intelligence of dogs. This will probably change your own view of what dogs are capable of in terms of intelligence. 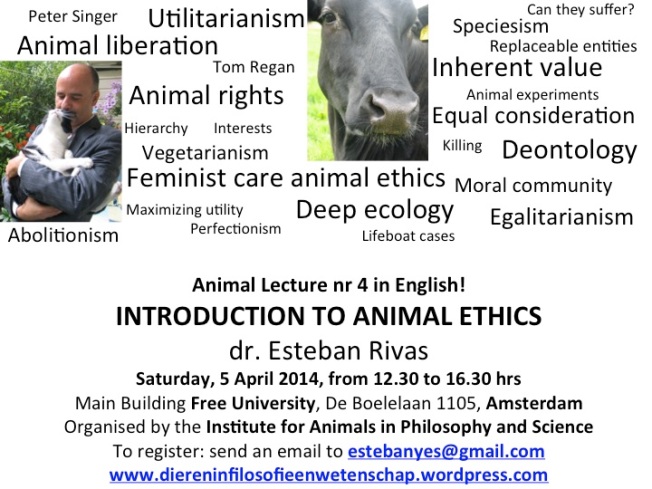 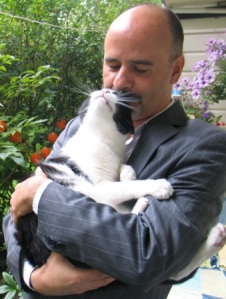 How can we best relate to other animals?

During this lecture dr. Rivas will give a review of the most important schools of thought in animal ethics. After a short introduction to philosophy and ethics and the history of moral thought about nonhuman animals, the most important current philosophers will be presented: Peter Singer and his utilitarian ethics of animal liberation. Tom Regan, who argues for animal rights from a deontological perspective. Philosophers who argue that the presence of sentience or consciousness is sufficient condition for moral consideration, such as Gary Francione. Philosophers who make a moral distinction between humans and other animals based on the capacity for language (Frey, Carruthers). Feminist animal ethics which looks at animals with the concepts of care and dialogue. And finally, deep ecology, in which humans and other animals are part of the biosphere. Questions that will be discussed are, a.o.: Is having self-consciousness of importance for the way in which an animal should be treated? Are some animals replaceable? When is a position speciesism, discrimination based on species? What are the arguments for equality among all animals? Do all living beings have an inherent value? What should one do if one were in a lifeboat with 3 other humans and 1 dog, and one individual should be thrown overboard in order for the lifeboat not to sink?

Practical information. The Animal Lectures are organized for people who work with animals professionally, for students, and for anyone interested in animals and eager to broaden their knowledge about them. A specific former education is not required. The lectures start at 12.30 and end at 16.30 hours. Registration for the Animal Lectures costs 35 euro for each lecture. Students with a student ID card pay 25 euro for each lecture.

Location: Main Building of the Free University, De Boelelaan 1105, Amsterdam. This location is well accessible both by car and public transport. Free parking is possible at the Gustav Mahlerlaan and the A.J. Ernstlaan.

FB page of the IAPS

FB page of the IAPS

Explore by choosing a tag